Trading is a risky activity. If you follow anything written in the article, you are responsible for the results. The result of this article may be decreased deposit and lost funds. By reading below and making any actions, you agree with our Disclaimer, Policies, and Risk Warning.

Link to this page location: #anchor1

Hi everyone! We continue our trading ideas section. The link to TradingView post with the idea is available here.

Recently Tesla surpassed Toyota in capitalization, which was the biggest auto manufacturer for the last two or three decades. I’d like to analyze this situation and argue that it may be a good time for a put option on TSLA .

Before I continue, I'm obliged to disclose the fact that I do not hold TSLA put options and only consider buying. As always, please note that this analysis is my point of view, and trading is a risky activity. You are the only responsible for your trading actions. Now, with disclaimers being said, let's take a look at the trade.

Let’s start with a short background. TSLA is a well-known company founded by Elon Musk, whose reputation and charisma attracted a lot of attention to the company. It specializes in electric cars, and recently, they announced and presented their pick-up, Cybertruck. Cybertruck pre-orders surged. Fox business article published on February 19, 2020, stated that the number was about 535k, which means it can be about 1 million right now. The stock price plunged during the COVID-19 crisis but rebounded pretty fast and set a new all-time high. 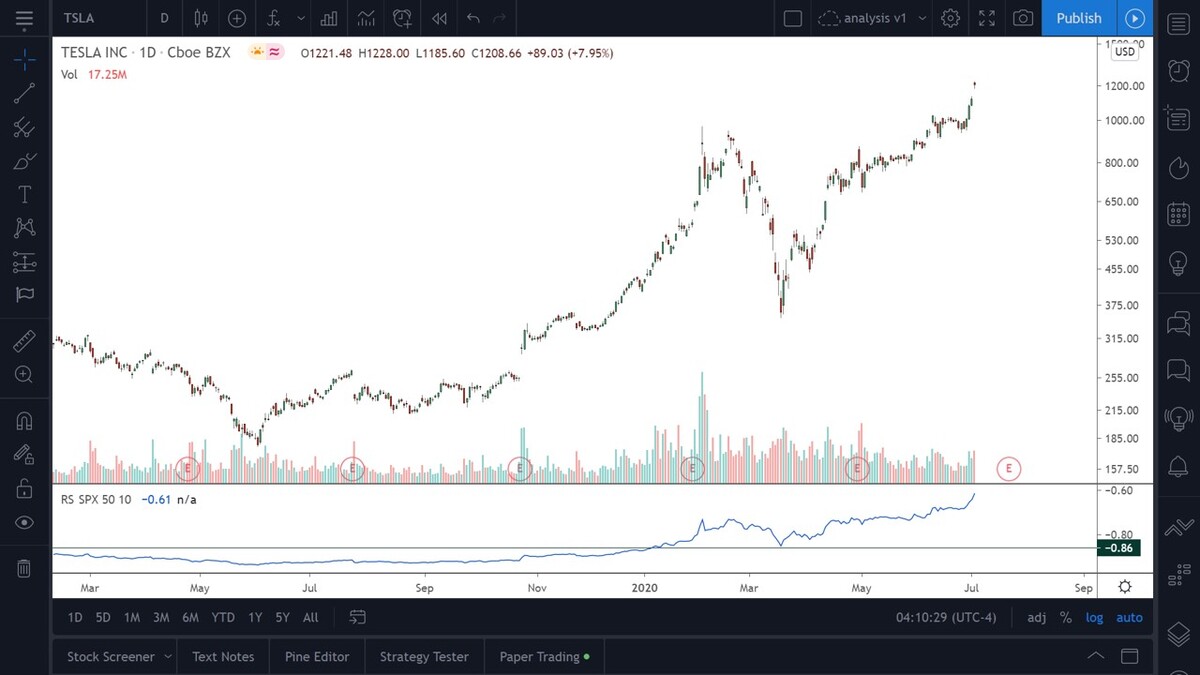 Let’s analyze the situation and try to answer the question – is the current price fair for TSLA stock?

As usual, I’ve started with fundamental parameters. I prepared a short PDF comparing key ratios and statistics for the leading automakers using Capital IQ. You can find the file here. Below I list several conclusions about the TSLA. In particular, I compare TSLA with TM (Toyota), which was the leader of the auto industry for decades.

Ok, so we considered several fundamental valuation multiples and state that the company may be overvalued. Now, the core argument against overvaluation can be as follows:

“The company value is a present value of all cash flows, and, given extremely high earnings and revenue growth, the value is a fair one.”

That is the statement I read quite often. It tries to apply classical finance valuation approaches to emotional bubbles, which works only until the bubble blows up. In the case of Tesla, we need to take into account several essential facts.

So, what’s the bottom line? The bottom line is that TSLA may be a great company, it may become a new Toyota, but right now, it seems overvalued because of public emotions and hype. If we include technical indicators in our analysis, I can mention the following:

What can be done in such a situation? Well, first of all, don’t short the stock directly! With such a strong trend, it may be a trading suicide. What I suggest is to consider buying put options.

For those who don’t know much about options, the put option gives you the right but not the obligation to sell the stock at a predetermined price for an upfront premium. So basically, you pay, let’s say 50 dollars per trade and fix your right to sell the stock at 1000 dollars in the next two months. If the price falls at least 51 dollars, you earn. If it doesn’t, then you lose your premium, the worst case.

Buying put should be accompanied by either a bearish candle pattern or volume surge, which I consider to be the best climax pattern. So, with this in mind, let’s wait and see what happens.